skip to main | skip to sidebar

Heir to the Throne

It is with the greatest Pleasure that we announce our Heir, Francis John Joseph Williams (affectionately known as 'Frankie'). 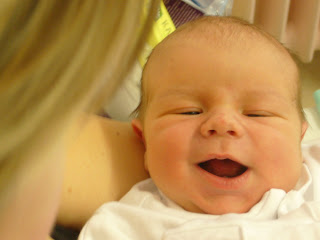 After a very long Labour he was Born by emergency caesarean weighing Eight pounds Fourteen and a half ounces, at four minutes past Six in the evening of the Twentieth of February two thousand and Eight.

The Grand Duchess and young Frankie are making good progress after a difficult start. The Grand Duke is feeling exhausted but elated. 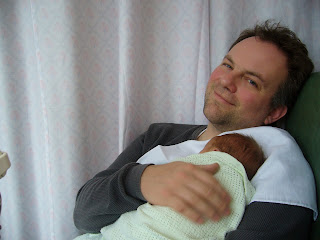 We send our grateful Thanks to the representatives of the various Imagi-Nations for their messages of Concern and Goodwill.
P.S. Whilst still on the operating table, the Grand Duchess asked the midwife what would have happened in this situation years ago. The midwife asked if we really wanted to know, and Judy said yes. The midwife told us that the baby would have died, and that the mother usually died too. Then the anaesthetist interrupted saying 'Happy stories!' and began cracking jokes to distract us. How amazing it is to benefit from terrific advances in medicine! As if Frankie is not miracle enough, I am very thankful to the brilliant staff of Nevill Hall hospital that, unlike our Lace Wars analogues, we are all very much alive and healthy, and the worst thing we suffer is being sleep-deprived.
Posted by Paul Williams at 13:41

Congratulations and welcome to the new young heir! And a wish for a speedy recovery for the Grand Duchess.

All of Saxe-Bearstein is delighted with the news that Kitschberg has an heir . . . and such a large and lusty lad he is too.

Our best wishes and congratulations to the Grand Duchess and yourself!

Congratulations to you both! The bells of Hetzenberg will ring a welcoming peal for your heir. =)

Congratulations from Karl Frederick and the whole Duchy of Tradgardland to you and yours!

Congratulations from the Soweiter League! Best wishes to baby, mother and father!

Many heartfelt congradulations for both the Grand Dutchess and Grand Duke for their new arrival.

May all such works of theirs and their kin be crowned with such success!

Congratulations! You both must be terribly happy and pleased. Frankie is quite a handsome baby.

Congratulations and best wishes to you 3!
Sincerely
Jean-Louis

Congratulations on your new arrival

Congratulations! Another wargamer comes into the world. We are glad to hear that all are doing well. A seven cannon salute will be fired in Raubenstadt in honor of the Heir of Kitschberg.

Best of health to mother and child and my best thoughts for a speedy recovery.

Belated, but heartiest, congratulations to Kitschberg from the Markgrafturm of Ober Nord Westfalen - may you not have too many sleepless nights!

Life is good. I just happened to stumble upon your blog via Emperor vs Elector. My congratulations to the happy Duke and Duchess. The smile on your face says it all.

congratulations happened to me 9 weeks ago.... there is still painting after heirs arrive,

The Grand Duchy of Kitschberg

Welcome to the Grand Duchy of Kitschberg!